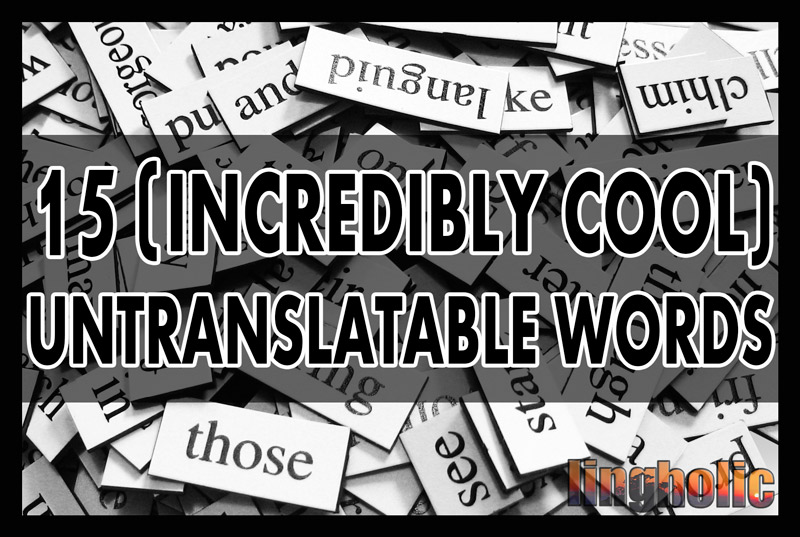 To unlock a society, look at its untranslatable words. –Salman Rushdie

Today Lingholic introduces you to 15 untranslatable words that would really come in handy in the English dictionary. Now, I’m sure a few people will look at this post’s title, then read through it, and then ask themselves, “Wait a minute, if these 15 words are untranslatable, why are they all followed by translations?”

That’s a very good point. Of course, what I mean by “untranslatable” is that these words do not have any direct translation (i.e. direct single word counterpart). But it’s cooler (and shorter) to have “untranslatable” in the title.

But I am in fact really curious about this: have any of you actually come across a word in a foreign language that you thought simply couldn’t be translated? Maybe a concept or a word that you just need to have had the experience of in order to understand? If you know of any such word/concept, it’d be awesome if you could share it with us in the comments below. For more on untranslatability, check out this Wikipedia’s entry.

And before jumping to the meat of the subject, there’s a really cool book that has inspired this post (and for which you will see a few illustrations in this post), entitled “Lost in Translation: An Illustrated Compendium of Untranslatable Words from Around the World.” It’s an awesome book with really pretty pictures. This would make a pretty cool gift to any language lover out there! 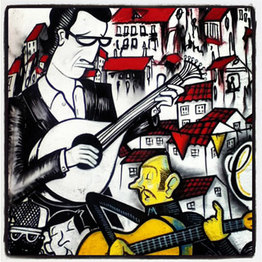 Well, you gotta start with the classics, right? Probably one of the most famous (and beautiful) Portuguese words, Saudade refers to the feeling of longing for something or someone that you love and which is lost. Fado music, a form of music characterized by mournful tunes and lyrics, relates to saudade.

Saudade is not just a feeling, but something that you can literally “have”. In Portguese, you could say “Tenho saudades,” which means, as you may have guessed, “I have saudade.”

This Kimbundu word, used in Angola, refer to a heavy mist or drizzle that occurs in the Congo basin area, often accompanied by onshore winds. It is synonymous for the cool season, and apparently, for the locals there is no translation possible. Upon hearing the word, Angolans would just think about the fresh air, the summer, the cool weather and the very cold water.

This useful German word is used to denote someone who is slowing things down by being fussy. It means an additional request which turns a simple delivery/operation/undertaking into a complicated one, often with only a marginal benefit and a sense of it being an unnecessary complication.

Hiraeth is Welsh and refers to a particular type of longing for the homeland or the romanticised past. The Japanese word “natsukashii” means something similar. It sometimes has connotations of nostalgia for an idealized past that never was.

A beautiful Japanese words that refers to the sunlight that filters through the leaves of trees. I love taking pictures of komorebi. 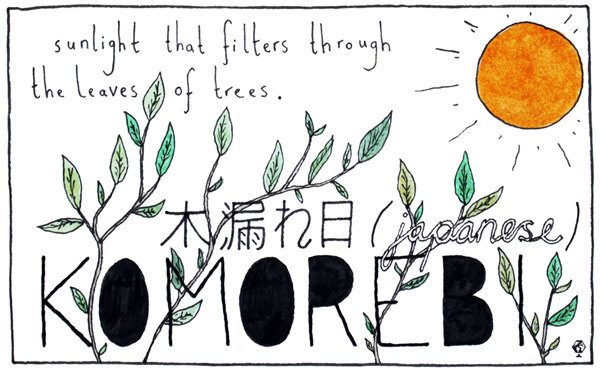 The word Mokita comes from a language called Kivila, spoken in Papua New Guinea. It translates loosely as “the truth we all know but agree not to talk about.”

The next time your girlfriend asks you “Don’t you think I’m pretty in my new dress?” you’ll get an instinctive feel for the meaning of this word. Dapjeongneo (답정너) is a recently created Korean word used when somebody (usually, you may have guessed, a woman) has already decided the answer they want to hear, and all is left for you to do is to utter that answer to her.

Waldeinsamkeit is German for “a feeling of solitude, being alone in the woods and a connectedness to nature.” Perhaps not the most useful word out there, and to be fair it’s a very old term that nobody uses nowadays, but it’s still pretty cool and would make you look very smart if you were to throw it in a discussion, and mention that Ralph Waldo Emerson even wrote a whole poem about it.

A word that’s in every French-speaking traveler’s vocabulary, it doesn’t translate to “homesick”, but rather refers to the feeling that comes from not being in one’s home country—of being a foreigner, or an immigrant, of being somewhat displaced from your origin.

Literally translated in English it would be something like “unlandscaped” (in fact it has an exact Italian translation, “spaesamento”). If can have a positive connotation, a “change of scene” that you experience when being in a completely new place. 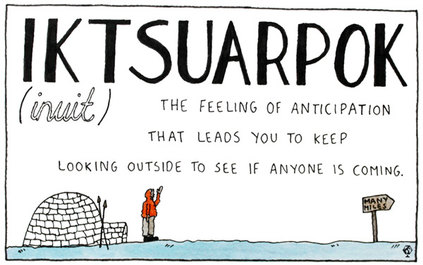 Iktsuarpok is Inuit for the feeling of anticipation that leads you to go outside and check if anyone is coming. It also denotes impatience. Imagine yourself living in an igloo in the middle of the northern tundra, where not a single living soul lives within 100 square kilometers: then I’m sure you’ll get iktsuarpok sooner than later.

Obviously people who live in some of the more populated areas of the globe would’ve probably never come up with this kind of word. It’s interesting to see how one’s environment clearly influences the creation of words.

Probably one of the more useful words out of this bunch if you have friends with a bad sense of humor, Jayus is Indonesian for “a joke so poorly told and so unfunny that one cannot help but to laugh.” 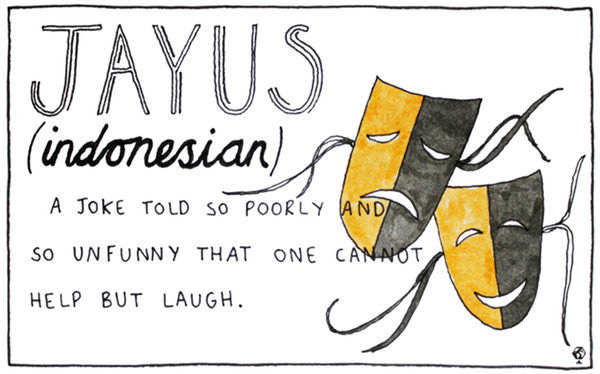 Let me try my hand at one:

Two antennas met on a roof, fell in love and got married. The ceremony wasn’t much, but the reception was excellent.

I challenge you to beat this jayus in the comments section below.

Mamihlapinatapei is an amazing word in Yagan, an indigenous language of Tierra del Fuego (an archipelago off the southernmost tip of the South American mainland, across the Strait of Magellan). It means the wordless, yet meaningful look shared by two people who both desire to initiate something but are both reluctant to start. Pretty cool, uh?

Another very German sounding word… because, well, it’s German. This verb means “to make something worse when trying to improve it.” Something we’ve all experienced, and now you know the exact word for it (just make sure to practice the pronunciation a couple of times…) 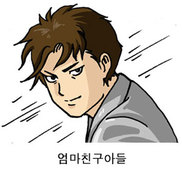 Eomchina (엄친아) is a hilarious Korean word that is a contraction of the phrase “Mom’s friend’s son” (엄마친구아들). Korean mothers are often very competitive and compare their children against the offspring of their friends. This word is used to describe a person who is more successful or skilled than you – the kind of person your mother would compare you to in a negative light so as to motivate you to study harder.

I started this list with a classic, and I thought I’d end with another one. This famous German word literally means “harm-joy,” and refers to the feeling of joy or pleasure when one sees another fail or suffer misfortune. The philosopher Arthur Schopenhauer mentioned schadenfreude as “the most evil sin of human feeling.” A number of interesting scientific studies of schadenfreude were undertaken in recent years. 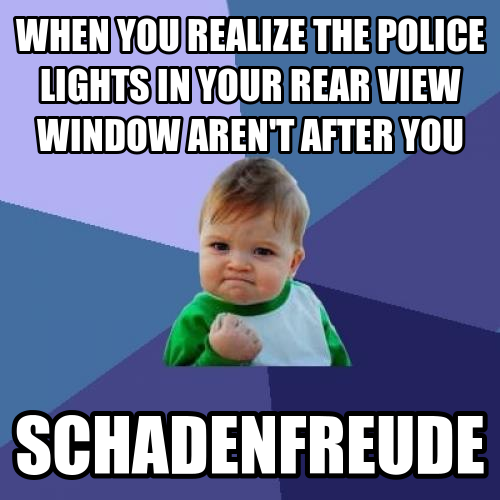 Are you planning on incorporating any of those 15 words into your vocabulary any time soon?

And what about English words that don’t have any translation in other languages? Try Gongoozle for one.

22 thoughts on “15 Untranslatable Words You Wish Existed in English”