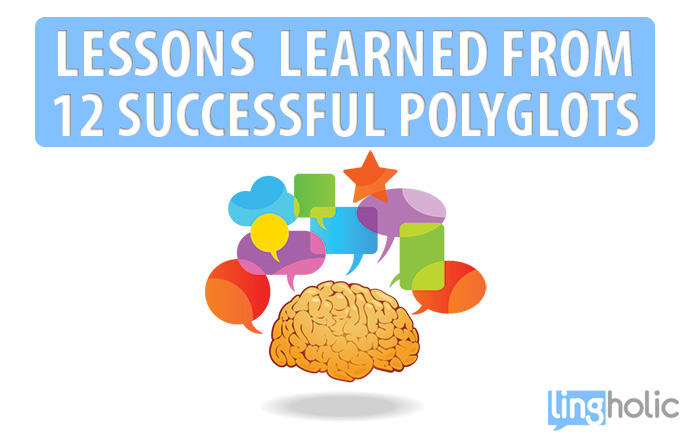 Over the past 2 years, I’ve had the chance to interview a wide array of polyglots of all ages and from vastly different backgrounds. From a globe-trotting blogger and a former diplomat to a Himalayan explorer and Britain’s most multilingual student, these passionate people have, more than anything else, deeply inspired me. They’ve taught me a handful of priceless lessons about language learning, success, and how to live a fulfilling life.

Today, I thought I’d take the time to have a bit of a deeper look over what these people have taught me, and share these lessons with you. I hope you’ll enjoy the nuggets of wisdoms that I’ve been able to collect over time from these inspiring individuals, and if you enjoy this article, the best way you can thank me is by sharing it!

Everybody is Different, They Say

The first thing you realize when you rub shoulders with successful people from just about any field is that everybody is different; everybody has their own way of doing things. Indeed, there is no “one size fits all” magic potion that will lead to success, there is no single paved road that will give you a smooth ride all the way to your dream destination. That, of course, is also true of language learning.

I remember reading a good book by author Earl Stevick, called “Success with Foreign Languages: Seven Who Achieved it and What Worked for Them” (it’s free to download, so have a look if you have the time, it’s worth the read). In it, the author shares 7 interviews he conducted with highly successful language learners, and the implications of the lessons gained for becoming a more successful language learner. After completing the interviews, Earl says that learners were even more different from one another than he had expected. “Success with foreign languages,” he says, “does not come by one simple formula.”

Indeed, one thing I’ve learned from my interviews with people such as Luca Lampariello, Benny Lewis, Susanna Zaraysky, Alex Rawlings, and Keith Swayne, is that they all vastly differ in their approach to language learning. Luca’s preferred method, now quasi famous, is bi-directional translations; Benny hammers the importance of “Speaking from Day 1”; Susanna’s Portuguese could be mistaken for a native Brazilian thanks to her love of music; Alex seems to have been highly successful at learning in a more academic setting; and Keith ascribes his success to the relationships he’s been building through chatting with natives in cafes.

The first thing you should understand from this fact is that whatever works for you is the right way to go. All these people are highly successful at what they do, yet they all go about learning languages their own way. They’ve all gotten to know themselves better as learners through a process of trial and error and through experience. Yet… there is indeed some common ground to be found.

And Yet… Something Does Bind Them All Together

Now, I’ve probably convinced you by now that we all learn differently and that the polyglots I’ve interviewed up until now approach language learning, for the most part, from vastly different angles. Yet, I’ve found that in fact there are a lot of similarities among all these polyglots; all you need is to dig a bit beneath the surface.

Let me explain. One thing that I’ve noticed from a majority of casual language learners, such as people who take language classes at schools and universities, is that they put language learning in some sort of “mental box” totally separate from their daily lives. That is, they have “study” time for languages (usually class time), and then everything else. If I’d draw a diagram, it would look like this:

However, here’s where things differ when you look at highly successful language learners: they don’t make this distinction. They simply blend, so to speak, languages to their lives. The fine lines between “learning”, “studying”, “enjoying”, and “living” seem to blur until these labels become relatively meaningless. Think about it: what are the things that you do every day in your native tongue? Just how many hours a day do you spend reading the news, watching TV, and talking with friends? When you stop seeing language learning as something that necessarily has to be done apart from your regular, daily life activities, things slowly start to become a bit more like this: 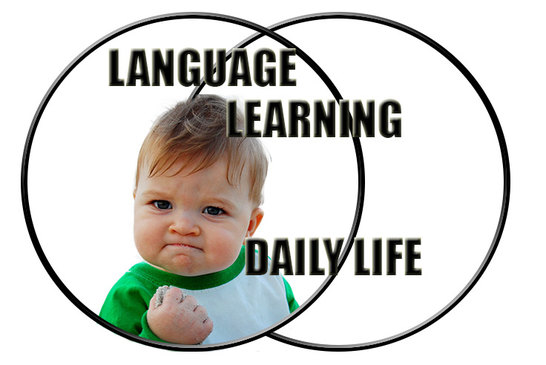 This may appear like a trivial fact, but this is in reality a very powerful idea to grasp: whatever you enjoy doing in your native tongue can be enjoyed in a foreign language. In fact, I’ve found that what I enjoy doing in my native tongue becomes even more exciting when done in a different language. Of course, when you just got yourself started with Spanish, you won’t jump on the latest copy of the 1000+ page Don Quijote de la Mancha. But even in the very early stages of language learning, nothing stops you from listening to Café Tacuba or watching one of Pedro Almodóvar’s blockbusters, even if it’s with subtitles.

So the next time you feel the urge to ask a polyglot the question “how long have you been studying so-and-so language?” try instead to ask “how long has it been part of your life?” You may get a more straightforward response!

So that’s it. I hope you’ve enjoyed this article, and hopefully you will have found something useful out of it. Interviewing and interacting with close to a dozen polyglots has certainly taught me that while they all approach language learning their own very unique way, there’s also something that brings them all together: it’s the passion for what they do and how it, quite simply, becomes a way of life.