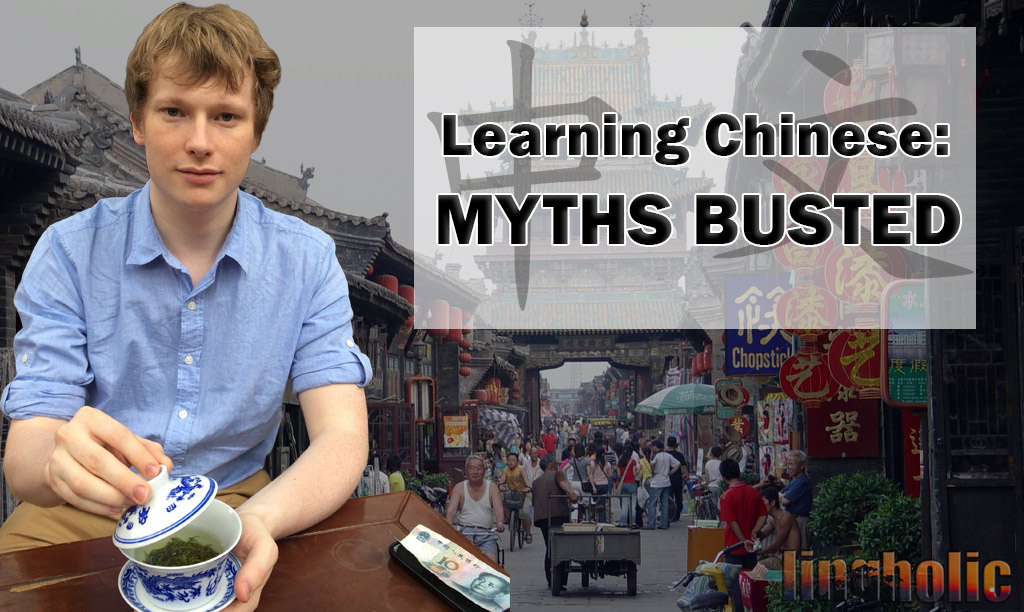 Today we have Beijing-based interpreter Chris Parker, who runs the website “Fluent in Mandarin“,  writing on Lingholic. Chris sheds some light on what it really takes to learn Mandarin Chinese, and why it isn’t as hard as most people would tend to think. I also had the chance to interview Chris, so make sure you check out the interview video below!

1) Nobody can understand unless your tones are completely correct

Let me explain what this one means. There are four “tones” in Mandarin Chinese, which means that there are four different ways of saying any particular syllable. Initially, this often gives learners the impression that Chinese is much harder to pronounce than other languages and it is much easier to be misunderstood.

I’ve heard learners speaking Chinese in a monotone, and I’ve noticed that most of the time, native speakers can understand without a problem, because they can guess the tones that you are trying to say. This is not to say that getting good pronunciation isn’t important – it is – but as with other languages, even when you come across people who speak with very bad grammar and pronunciation, you can still usually understand the basic message.

Another thing to remember is that when Chinese is sung, the melody of the music takes the place of the tones, and the listener has to interpret the tones of the words, so it is possible to mostly be understood without them. If in doubt, it is better to pronounce a word in more of a flat tone if you are not sure than to guess the tone of the characters and get it wrong. That’s when most of the misunderstandings occur. The best thing, though, it to pay extra attention to the tones you use as you speak and listen, and keep working on your pronunciation, so you get things right!

Looking up characters in a Chinese paper dictionary can indeed be a challenge. Essentially, you have to find the core part of the character, called the “radical”, and count the number of extra strokes to find the character from a chart.

However, for the Chinese learner, there is really no need to flick through a paper dictionary any more. In fact, I haven’t used one for years. iPhones and Android smartphones have built in recognition for Chinese characters, so you can simply write the character on the screen with your finger and the phone will recognize it for you so that you can conveniently look up a character in a dictionary such as Pleco wherever you are.

Ok, I admit it, there are a lot of characters in Chinese, but then there are also a lot of words in English or Russian or Spanish. The good thing about Chinese is that most of the many characters that exist are not in common use. If you know the 2000 most common ones, you’ll be able to recognize 97% of the characters in modern Chinese, and that’s not too unrealistic a goal, right?

The other thing is that there are software tools like Dimsum Chinese Tools, Wenlin and Adsotrans that will give you a translation of any character you hover your mouse over, which makes improving your reading much easier and saves you time looking things up in dictionaries. In fact, the Google Translate browser add-on can be extremely helpful in this regard too. A simple web search for useful apps and software for learning Chinese characters will yield plenty of good results, so don’t be afraid to dig a little.

4) You have to learn calligraphy and write with a brush, and it is so difficult to learn writing and all the other areas at once

The first part of this myth I can debunk straight away. Calligraphy is an art form of its own throughout the Chinese-speaking world, but in daily life most people just use a pen or pencil.

If you’re anything like me, you probably don’t write much by hand any more. You’ll be pleased to know that to type Chinese on a computer or phone, you simply need to know the Pinyin pronunciation of the character and to be able to pick it out from a list. If you’re interested in learning to write by hand, you can take that much slower, at your own pace.

As with other languages, the writing system and the spoken language in Mandarin are intrinsically connected, so the more you read and the more subtitles and signs you see, the more familiar the characters will become, so it’s possible to learn characters at the same time as you learn the other skills of the language.

The way Chinese works is not as rigid as French or Spanish. There are not a large number of cases and grammatical constructions like there are in Russian. Sometimes there may be a few “correct ways” of writing a sentence, but it is not true to say that Chinese “does not have grammar” or you can write it any way you want.

Think of Chinese characters like building blocks, which never change, but fit together to form “words” and sentences. In Chinese grammar, the order of the characters and words is the most important thing. Once you are familiar with how word order works and you know the basic constructions, you have basically cracked it!

6) Chinese people only want to practice English, so it’s difficult to build up your speaking ability

I haven’t found this one to be true at all, but I think the reason why this can happen is that a lot of people learn Chinese as a student or in a school, where the teachers and students may have a higher level of English, so they may respond in English out of habit or convenience. But, if you venture outside these bubbles, you will find that whether you are in mainland China or Taiwan, people feel most comfortable speaking Mandarin, and are patient about speaking it with foreigners. Learning as much as you can before you arrive in the country can also help you to take control and get a head start!

7) You can never learn Chinese unless you live in China

Admittedly, being in a Chinese-speaking area helps a lot if you’re learning the language – after all, it stands to reason. However, that being said, you will find that a lot of Chinese people are curious about the outside world and are very willing to meet foreigners online. You can find a lot of native speakers on language exchange websites, and on italki.com and livemocha.com, where you can find teachers to tutor you one to one over the internet.

This may have been the case a couple of decades ago, but it’s not true anymore. There are so many resources for learning Mandarin now, and more and more materials are appearing all the time. All the major language learning book series offer Mandarin courses, including Teach Yourself, Rosetta Stone, Living Language, Assimil, Colloquial Chinese and so on. I also have an intensive video course for beginners on my website, which you can also check out.

When you get beyond the beginner stage, you can watch Chinese TV live online very easily from anywhere in the world, and find loads of radio stations on tunein.com.

So, as you see, many of the popular myths about learning Chinese are not really true, and many have been exaggerated in the media. The most challenging aspect of the language for me is writing characters, but learning Chinese is perfectly manageable if you take it slowly over a long period of time. So, why not step away from the myths into reality and try learning some Chinese now?

Chris Parker  has been speaking Mandarin since 2006. He has worked as a translator and simultaneous interpreter between Chinese and English, and has taught interpretation in the UK and in Beijing. He now works in the online media, specializing in international communications strategy. He gives learning tips and teaches Mandarin on his blog, YouTube channel and through Facebook.