Memory Tip #12: Divide Your Time In Short Bursts Of Study

This is the twelfth and last tip on my “Twelve Awesome Ways To Drastically Improve Your Memory” series. If you’ve followed all along, I hope you’ve found something useful out of my writing and that you’ll be able to apply at least a few of my recommendations into your learning endeavors. 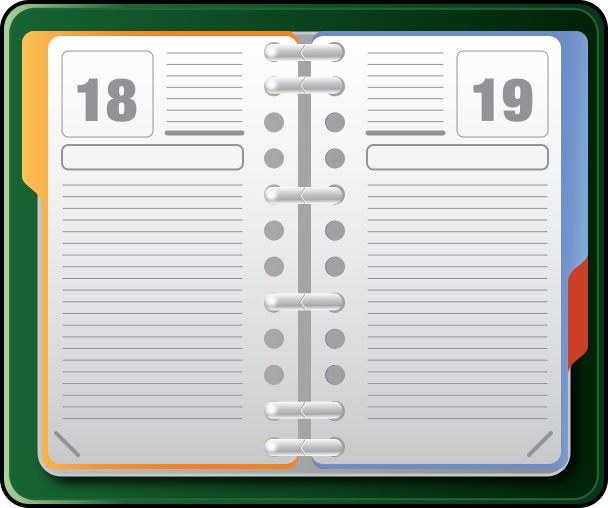 This last tip is another crucial point to keep in mind if you want to learn, study, and remember better. It’s so easy to implement, yet so many of us simply forget about it. So here it is: when studying, divide your study time into smaller chunks that are punctuated by periods of rest. It’s really important to take some periods of rest when doing intense mental activities such as studying a language or preparing for an exam.

It’s not for no reason that the Pomodoro technique—a time management method developed by Francesco Cirillo in the late 1980s—is a popular one for learning. It proposes to work/study in smaller chunks of 25 minutes, and take a 5 minute break in between those chunks. Additionally. every four “pomodori” (i.e. every 2 hours) take a longer break of 15–30 minutes. A pomodori refers to a 25-minute period of work/study. This technique can help you stay focused because you know the entire time that you’re never far away from a break.

So why is it better to take short breaks in between your periods of study?

Well, it’s related to something called the primacy and recency effects. Say you’re trying to memorize a list of 50 words without using any of the techniques we have discussed so far. Chances are the first five or so will stick more easily than the others. This is the primacy effect and it operates because of your patterns of concentration during learning. When learning, you’re also more attentive and alert at the beginning. As your brain begins to assimilate that information for storage, however, it’s distracted from concentrating on the next wave of information, leading to a sag in learning.

Once you perceive that the information is coming to an end, your concentration levels tend to pick up again, because your brain anticipates the end of the period of concentration, which sort of wakes it up. This is called the recency effect.

Eight-time memory world champion Dominic O’Brien mentions this effect in his book “You Can Have an Amazing Memory”. In the graph below, which shows a person’s attention over the course of time, the primacy and recency effects result in a big sag in concentration in the middle, so that recall levels drop to about 25 percent. 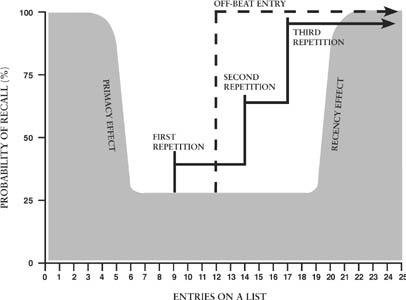 That’s why, O’Brien says, “there are various techniques that lecturers or speakers use to ensure that the sag is minimized and that the important information is hammered home. The first is repetition: think of advertising campaigns you hear on the radio or TV – how often do you hear the product name? Usually it’s repeated several times, even in a 30-second slot, because your brain absorbs it more willingly if it hears the name more than once.”

Other techniques often used by speakers or lecturers include adding humor or something off-beat to a talk. Indeed, The Von Restorff effect, also called the isolation effect, predicts that an item that “stands out like a sore thumb” is more likely to be remembered than other items. We have a bias in favor of remembering the unusual (remember the method of loci and the visualization techniques I mentioned?).

In any case, it’s crucial to divide your time into shorter bursts of study, and it has been proven repeatedly that it is better than to try to focus for a full two or three hours before taking a break. It stands to reason that short bursts avoid the negative impact of the primacy and recency effects on your ability to retain information.

So, the next time you’re studying, working, or learning something, force yourself to take a break every 20 or 25 minutes. We often get absorbed by what we do, and thus easily forget this important and simple tip. Consider buying a small timer if you think it might come in handy to you, or simply download the free Pomodoro app for your computer.

Posted in Improve your Memory

13 thoughts on “Memory Tip #12: Divide Your Time In Short Bursts Of Study”