Reaching a Plateau in Language Learning – How to Get Out of It?

There is probably nothing as frustrating as putting a hell of a lot of amount of work, and not feeling like you’re making any progress. Sadly, though, this situation happens to a lot of language learners, and it often becomes a dominant factor in people’s decision to stop learning a foreign language halfway through their goals. This is what we commonly call “reaching a plateau”.

So why does it happen, and how can we avoid it, or at least, get out of it?

Routine, and Reaching the Autonomous Stage

Dr. K. Anders Ericsson, a Swedish psychologist and Professor at Florida State University, is widely recognized as one of the world’s leading theoretical and experimental researchers on expertise. According to him, hitting plateaus is a common occurrence in skill development (not only limited to language learning). Far from being a steady linear progression, mastery comes in bursts.

There are many causes of plateaus but a major one seems to be routine, according to many experts. Sticking to the same habits, whether it’s writing, typing, learning a language, or programming, often results in failing to progress, despite investing a lot of time. 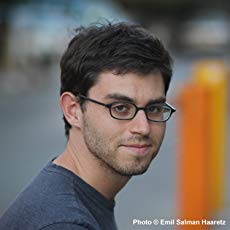 In “Moonwalking With Einstein”, a book about memory and skill development, author Joshua Foer says that when people first learn to use a keyboard, they improve very quickly from sloppy single-finger pecking to careful two-handed typing, until eventually the fingers move so effortlessly across the keys that the whole process becomes unconscious and the fingers seem to take on a mind of their own.

The funny thing, however, is that at this point most people’s typing skills stop progressing. They reach a plateau. If you think about it, it’s a strange phenomenon. After all, we’ve always been told that practice makes perfect (it doesn’t; perfect practice does), and many people sit behind a keyboard for at least several hours a day in essence practicing their typing. Why don’t they just keep getting better and better?

In a nutshell, the reason for this is that after a lot of deliberate practice (consciously trying to get better at something and working on one’s evident flaws), we eventually reach a phase called the “autonomous stage,” when we figure that we’ve gotten as good as we need to get at the task and we’re basically running on autopilot. During that autonomous stage, we lose conscious control over what we’re doing. That’s what some call the “OK plateau,” the point at which we decide we’re OK with how good we are at something, turn on autopilot, and stop improving.

However, Dr. Ericsson says, what separates experts from the rest of us is that they tend to engage in a very directed, highly focused routine, something labeled, once again, “deliberate practice.” Experts and top achievers in various fields tend to follow the same general pattern of development. They develop strategies for consciously keeping out of the autonomous stage while they practice by doing three things: focusing on their technique, staying goal-oriented, and getting constant and immediate feedback on their performance.

Joshua Foer says—and if you haven’t been paying attention so far you should really read this one carefully—that “when you want to get good at something, how you spend your time practicing is far more important than the amount of time you spend. In fact, in every domain of expertise that’s been rigorously examined, from chess to violin to basketball, studies have found that the number of years one has been doing something correlates only weakly with level of performance.” [emphasis added]

Well that’s good news for all of us, because first of all this means that we can, in many instances, get out of a plateau by focusing on our technique, staying goal-oriented, and getting constant and immediate feedback on our performance (in language learning, this could mean recording and listening to yourself).

But here’s the thing: many language learners only reach the so-called “autonomous stage” when they have reached a fairly advanced level of studies. In other words, when they feel they don’t really need to improve that much anymore, this is when their language skills truly hit a plateau. For most of us, however, we tend to feel like we stop making progress around the intermediate phase. Why is that?

The keyword here is diminishing returns, and this is an important concept in language learning that many people do not understand. The law of diminishing returns is actually taken from the field of economics, but when applied to language learning it means something like this: the more effort you put into learning a language over time, the smaller your increases in fluency become. The more time you invest, the smaller your returns on investment become.

If you have read my post about the number of words necessary to reach basic conversational fluency, you will know that, roughly, a vocabulary of just 3000 words provides coverage for around 95% of common texts (such as news items, blogs, etc.). The remaining 5% of the vocabulary you need to know to really fully understand common texts is in the magnitude of tens of thousands of words (the average active vocabulary of an adult English speaker is of around 20,000 words, with a passive one of around 40,000 words). Knowing 3000 words puts you in the intermediate stage of language learning, after which learning words doesn’t seem like it makes that big of a difference anymore. 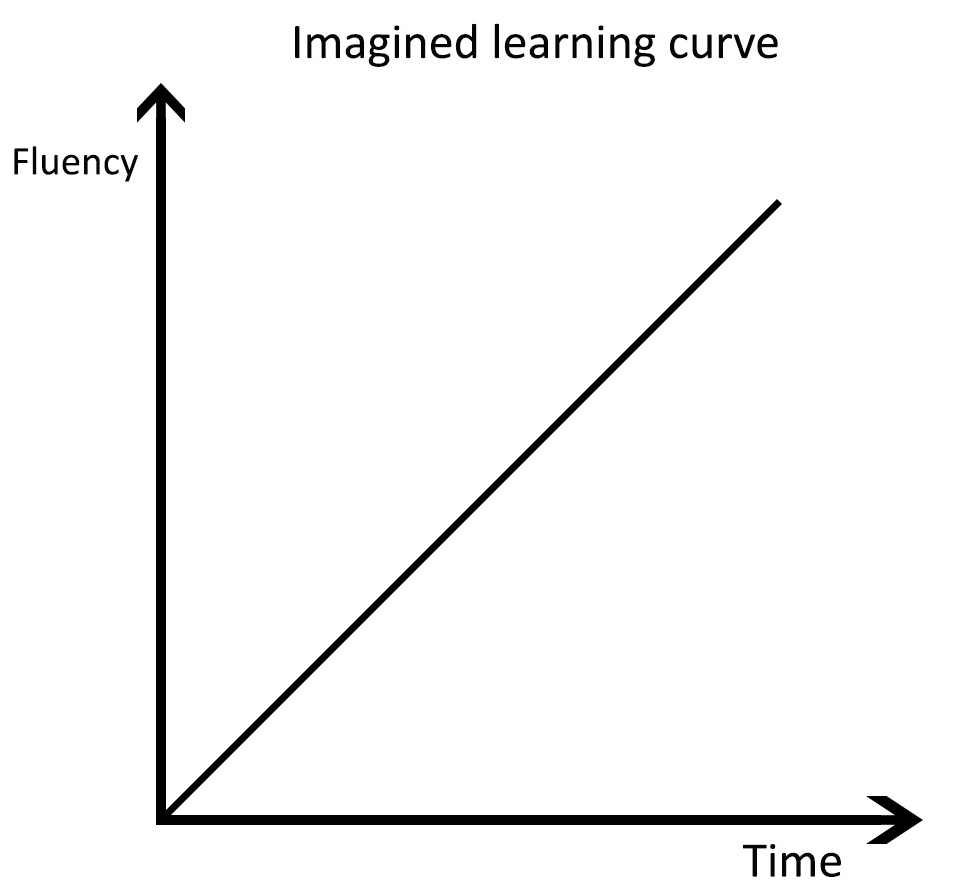 So here’s the problem: people do not, technically, reach a plateau. They simply progress at a much slower pace. They feel like they have reached a plateau because of how they view language learning. If we were to draw a graph, this would be the imagined learning curve of a language learner:

In the minds of many people who undertake the study of a foreign language, putting more study time should necessarily equal to gaining proportional increases in fluency. However, this is clearly not how things work.

Here is another graph, which shows something that might be slightly closer to the truth. 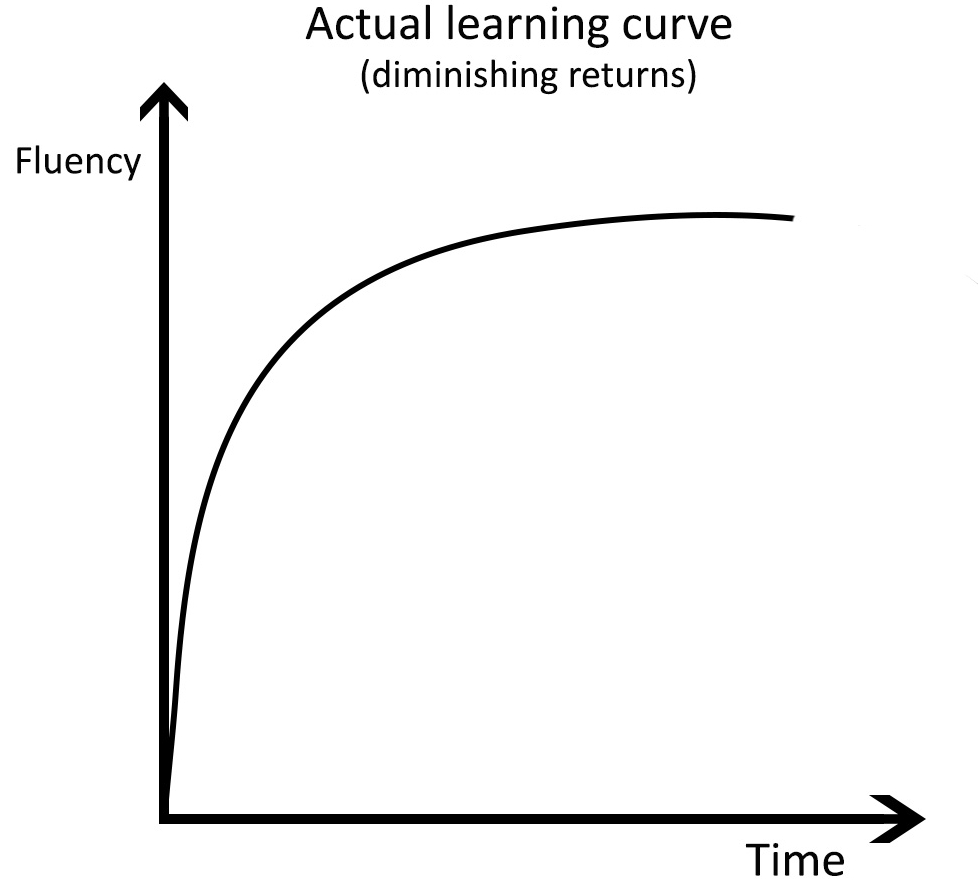 As you can see, in the beginning stage, there is a rapid increase in fluency over a rather short period of time. This is because, as stated earlier, a relatively few number of words keep showing up all the time (the “Reading Teachers Book of Lists” claims that the first 25 words are used in 33% of everyday writing), and so learning these words provides a huge return on investment. Not only that, because you started from a “blank slate,” so to speak (you had no knowledge of the foreign language before starting to learn it), you can clearly see and feel the progress you are making since it’s easy to compare your current level of fluency to what it was just a few weeks ago.

By changing the way you think, then, or in other words by changing the way you see how your learning curve really works, you will probably understand that in most cases, what you have reached is not a plateau, but simply an intermediate phase where it will take more and more time to get similar gains in fluency to what you got before.

John Pasden, who has been overseeing the development of lesson materials at ChinesePod since 2006 and who is the author of the popular blog Sinosplice, says the following in regards to reaching a plateau:

The frustrating thing about the plateau is that you don’t feel like you’re making progress when you really are. It didn’t feel like my Chinese was getting significantly better as I acquired the vocabulary and grammar to pass the HSK, or even as I got steadily better at writing essays in Chinese. It’s not until well after the fact that you can look back on that period of time and realize that your skills really have progressed a fair amount since then.

He adds that for him, the key to getting through that intermediate plateau period was having a sequence of reasonable, attainable goals.

The Balance Between Habits and Change

The last point I will cover in this post is the importance of getting into a routine, or developing certain habits, but also of knowing when to change methods and when to diversify your learning material. 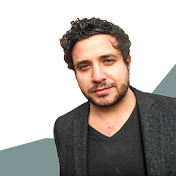 In my interview with Luca Lampariello, an amazing language learner who speaks 12 languages, I asked him what he thought about reaching plateaus. His answer? “I’ve never really thought about that,” he told me, “because I don’t think I’ve ever really felt like I reached a plateau.” The reason Luca gave me for this surprising answer is that he varies the material he uses as soon as he reaches an intermediate stage. He says it’s important to be aware of which stage of language learning you are in (you can consult the “Common European Framework of Reference for Languages” for more on that). At the beginning stages, Luca only deals with one, or at most 2 to 3 resources to learn the language (mostly Assimil). After reaching an intermediate stage, however,  he really starts to vary the material he uses.

If you feel like you haven’t made much progress recently, perhaps consider looking into changing the material you’re using. If you’ve been using the same textbook or the same method for learning a foreign language and it just doesn’t seem to work anymore (different methods and study material work for different stages), think about adding some variety to your study tools. 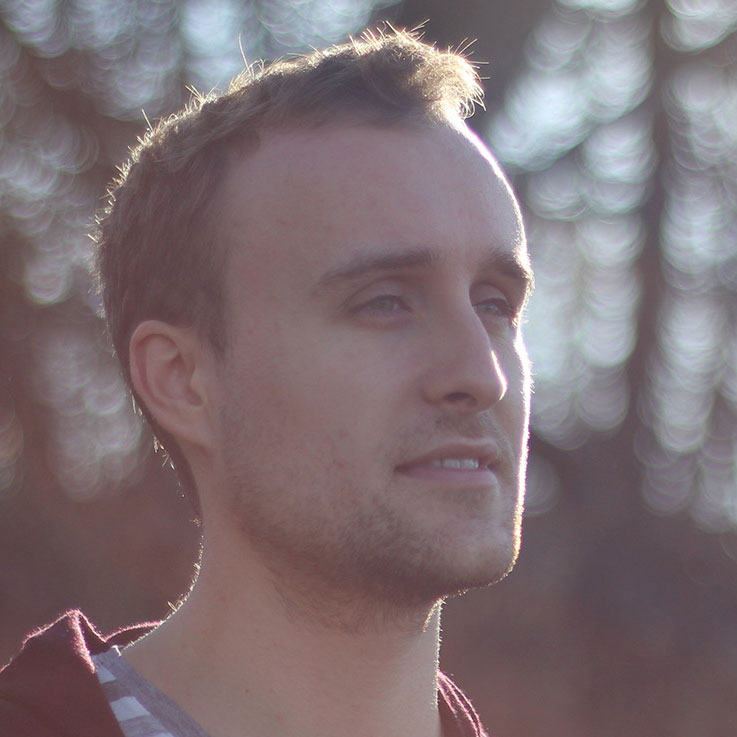 As Scott H. Young has said in his post entitled “Are Habits the Enemy of Mastery?”, the fact that sticking to the same habits (or learning material) when learning something can bring about a plateau is an interesting paradox. “On the one hand, good habits are essential for building skill,” he says. “If you’re not regularly showing up, every day, how can you possibly hope to invest the thousands of hours of practice needed to get good? Yet those same habits also have the cost of potentially stalling your improvement.” 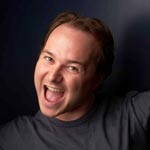 And as Benny Lewis explains in his quest to speak Mandarin after only three months’ practice in Taipei, completely changing your learning strategy can sometimes get you out of the rut you are stuck in. “One of the key factors of ensuring fast progress [in my mission to learn Mandarin] has been that I have changed my approach entirely every week,” Benny says.

What do You Think?

So, what are your thoughts on that? I would love to hear your stories, how you dealt with the feeling that you didn’t improve anymore, and how you kept yourself motivated and did not give up on your goals. Have you ever thought of language learning in terms of diminishing returns? Do you change the study material you deal with as you progress from a beginner to an intermediate and advanced stage?

If you’ve enjoyed this post, drop by my Facebook, Twitter pages to say hi! It means a lot to me~ And if you have any questions about any of the concepts I’ve talked about in this post, I’d be more than happy to answer them! Don’t hesitate to comment, it’s always much appreciated!

26 thoughts on “Reaching a Plateau in Language Learning – How to Get Out of It?”