Fillers are everywhere: they’re the ums, uhs, and likes that sneak their way into our speech, often times without us even realizing it. Indeed, fillers, also known as disfluencies, carry no semantic value, but they are used abundantly in natural speech, and are different in each language. Despite the bad rap that fillers get from schoolmarms and speech coaches, it’s important for language learners to acquaint themselves with the fillers in their language of study — nothing gives you away as a foreigner quite like saying, “Yo quiero, um, un helado.”

Perhaps ironically, learning the disfluencies in your language of study will actually make your speech more fluent. Non-native speakers in particular will encounter moments in which they need to fill the silence while they search for vocabulary, and fillers are an excellent way to do so without creating an awkward pause. But most textbooks don’t consider fillers as worthy of study, so it’s hard to find good information on how to incorporate fillers into your language learning. Here, we’ll take a look at fillers in several languages, which will hopefully, um, give you a better sense of how fillers are used cross-linguistically. 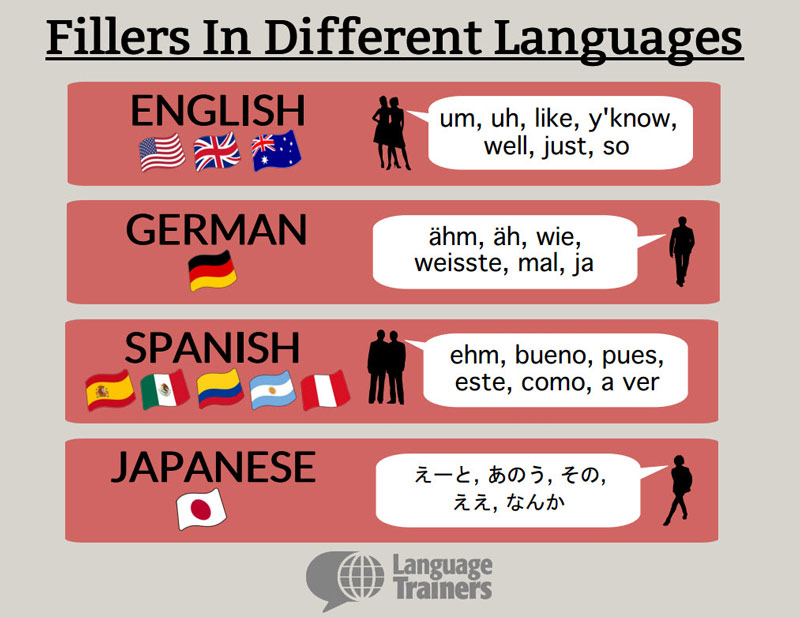 English has a variety of fillers which can be used in several different discourse contexts. For example, the words so and well are often used to initiate a sentence, as in the following examples:

– So, do you think using fillers is important?

– Well, native speakers use fillers a lot, so I’d say they are pretty important.

Other fillers, such as like and you know (shortened colloquially as y’know), can be used almost anywhere in a sentence. They’re also often used in conjunction with each other, as in the following example:

– I want to, y’know, like, learn a lot of different languages.

In English, the most common fillers are um and uh, which are used as pauses between words, or as indications that the speaker has not yet finished talking. Interestingly, a recent study from the University of Rochester found that English speakers are more likely to pay attention to unfamiliar objects if the word “uh” is used before stating the object’s name. Thus, words like “um” and “uh” indicate to speakers that something unfamiliar is about to happen, so they’d better pay extra attention.

German-language fillers (“Füllwörter” in German) bear significant resemblance to those in English. For example, the German equivalent to um and uh are ähm and äh (respectively), which are pronounced almost exactly the same. German speakers also uses the pronoun wie in the same way that English speakers use the word “like”. In fact, German even has an almost identical version of “you know” — weisst du, which is shortened as weisste in the same way that “you know” is shortened to “y’know”.

Some German fillers are used to have a softening effect. For example, the word mal — while it carries no meaning itself — is used to make commands seem less abrupt and more polite, as in the following example:

Likewise, other German fillers are used to carry an intensifying effect. The German word ja means “yes”, but is often used as a filler to emphasize something or strengthen one’s convictions. The 2012 film Das ist ja Leben selbst! (“This is Indeed Life Itself!”) perfectly exemplifies this use of the word ja: it makes the statement forceful and emphatic. If Clueless were a German film, the characters would constantly utter “wie” instead of “like”. Image via Dailymotion

In Spanish, some fillers (“muletillas” in Spanish) are similar in form and function to those in English. The equivalent to um is ehm, which is pronounced more like “ehm” than “um” (try to stop saying “um” to avoid sounding like a gringo). Also, some fillers, such as bueno and a ver, fulfill the same role as “so” and “well” in English, in that they’re often used to start a sentence:

– Bueno, por qué es importante aprender las muletillas? (So, why is it important to learn fillers?)

– A ver, escúchame y te lo explico bien. (Well, listen to me and I’ll explain it to you.

Further, excessive use of certain Spanish fillers can be suggestive of certain social information. If your speech is littered with o sea (and tipo if you’re in Argentina), you’re at risk of being categorized as a fresa (Mexico) or a cheto — a stereotype of a braindead, bubblegum-chewing teenager who cares about fashion, gossip, and little else. An English-language equivalent would be overuse of the word “like”.

Japanese, which bears little relation to English, has very different fillers. The most common ones are eeto (えーと) and ano (あのう), which are used like “um” and “uh”. In fact, you can extend them to match the length of the pause, so if you really need to stop and think, you can say eeeeto or anooooo. The filler nanka ( なんか) is used especially when you are searching for the next word, and can be considered a synonym of the word “like”.

In Japanese, speech without fillers can come off as overly formal or harsh. Thus, using fillers makes you seem more conversational and personal. This is in tune with a recent study conducted in English regarding phone survey interviews. Researchers at the University of Michigan found that the most successful interviewers (that is, those who were most successful at keeping respondents on the phone to answer questions) used fillers such as “um” and “uh” moderately. Notably, they were more successful than those who made no pauses at all, whose speech sounded overly scripted and robotic. Thus, conservative use of fillers seems to lend credibility to speakers, rather than hurt it. 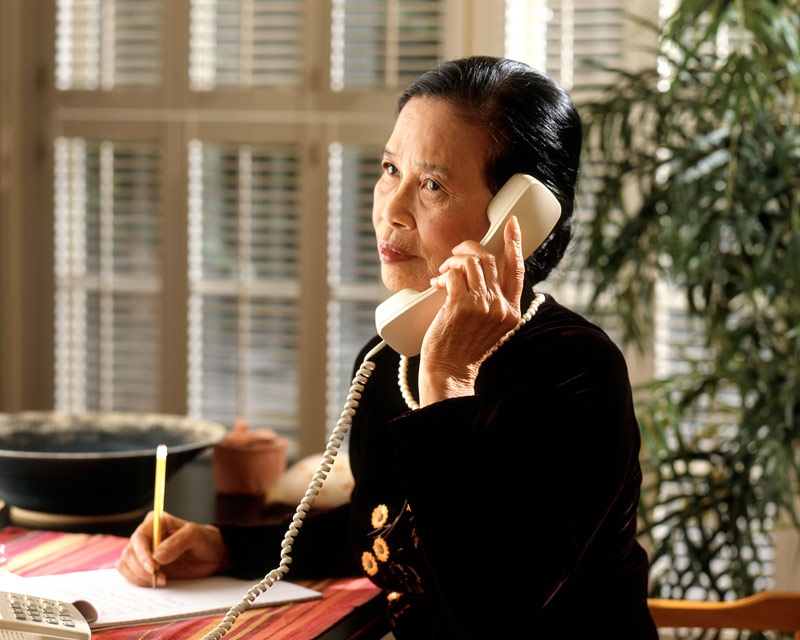 Of course, there is a time and a place for fillers: if you’re about to give a speech in front of the UN, for instance, try to keep the ums, ähms, ehms, and えーとs to a minimum. But in casual conversation, using fillers can not only help you appear approachable and conversational, but can actually increase your fluency, by filling your silences with words that native speakers would use. Try to kick your habit of saying “um” and “uh”, and instead adopt the fillers that you hear from native speakers in your language of study.

What fillers are used in your language? What other fillers would you add to this list? Let us know in the comments!

Paul writes on behalf of Language Trainers, a language tutoring service offering personalized course packages to individuals and groups. Check out their free language level tests and other resources on their website. Visit their Facebook page or contact [email protected] with any questions.

39 thoughts on “So, Are Fillers Okay to Use When, Um, Learning a Foreign Language?”