There are a lot of self-study language methods out there, and for the person looking to learn a language on their own, it can be hard and confusing to choose the method that suits your needs. There are plenty of great methods available to students wishing to learn a language on their own, and in this post I’ll try to tackle a few that, in my opinion, as well as in the opinion of some of the most well-known polyglots out there, are some of the best and easiest to go through.

So if you were to ask “What’s the ‘best’ method out there?”, what could a seasoned language learner answer? Well, the truth is, there is no objective or universal answer to this question. Since we all learn in different ways, some methods might be more suitable to some people than others. Plus, different languages might need to be learned in different ways, again, depending on your learning style and on your ability to acquire and understand new grammatical structures and language systems. For example, I have learned Spanish very differently from Korean. Spanish is a Romance language very similar to French and English, languages I speak fluently. Korean, on the other hand, is at the complete opposite end of the spectrum. While Spanish can often be learned in a more “inductive” manner, this does not always work with Korean. So you’ll have to keep this in mind when trying out a new or old method and when relying on your learning habits that might have worked in one instance, but might not work the best in another.

Other examples abound, but the point is, don’t get stuck on a method that somebody has recommended because it worked for them. Some people love grammar, literally. They find they can learn the language quickly and easily that way. Others simply loathe it. The bottom line is, read about a few language methods, and try out a few to get to know which one might be the best fit for you. In this post, I’ve picked some of the most popular self-study methods out there, and I’ve tried to give you a very broad overview of what they do, and if they are worth your time and money. Hope you enjoy

Available in: over 40 languages

Type of method: dialogues with minor grammatical explanations in footnotes. Audio, entirely in the target language, is included.

The first self-study language I will introduce is one of my favorites, and it’s the favorite method of several well-known polyglots, including Luca Lampariello, who speaks nearly 12 languages fluently, and Robert Bigler, a simultaneous interpreter from Austria who speaks many languages as well.

The method is called Assimil, and although it is not that well-known in North America, it is an extremely popular method in Europe. So what is it, how do you use it, and why do I recommend it?

Well, first of all, Assimil is available in more than 40 languages. The series was created back in 1929 by Alphonse Chérel. From the website’s description, “[Assimil] enables beginners to acquire an average vocabulary of 2,000 to 3,000 words, learn the basic grammar rules, and gain a command of everyday conversation. The With Ease Series takes you to Level B2 [high-intermediate] of the Common European Framework of Reference for Languages in a few months.”

Each method consists of a coursebook with 100 lessons on average (~4-6 pages/lesson). Each lesson includes a short dialogue (getting progressively longer throughout the book), written in the target language (L2), together with a translation after each dialogue, as well as short exercises to test your comprehension. You are recommended to spend at least one day on each lesson and to review them every once in a while. As you follow through the dialogues, you listen to the audio and read through. The great thing about the audio is that it does not contain lengthy explanations in English. I believe this is good and important, because there is nothing as annoying (and useless), in my opinion, as audio CDs that are half in your native tongue, with things such as “repeat the following sentence” or “pay attention to this particular ending”, etc.

Assimil, you might have guessed from the name, encourages learners to “assimilate” the language, similarly to how you assimilated your mother tongue when you were a child. It’s very intuitive, but at the same time there are helpful explanations grammatical rules and language expressions in the footnotes. Below, you’ll see a preview of what the Assimil method looks like. I’ve picked a random page from their French method. 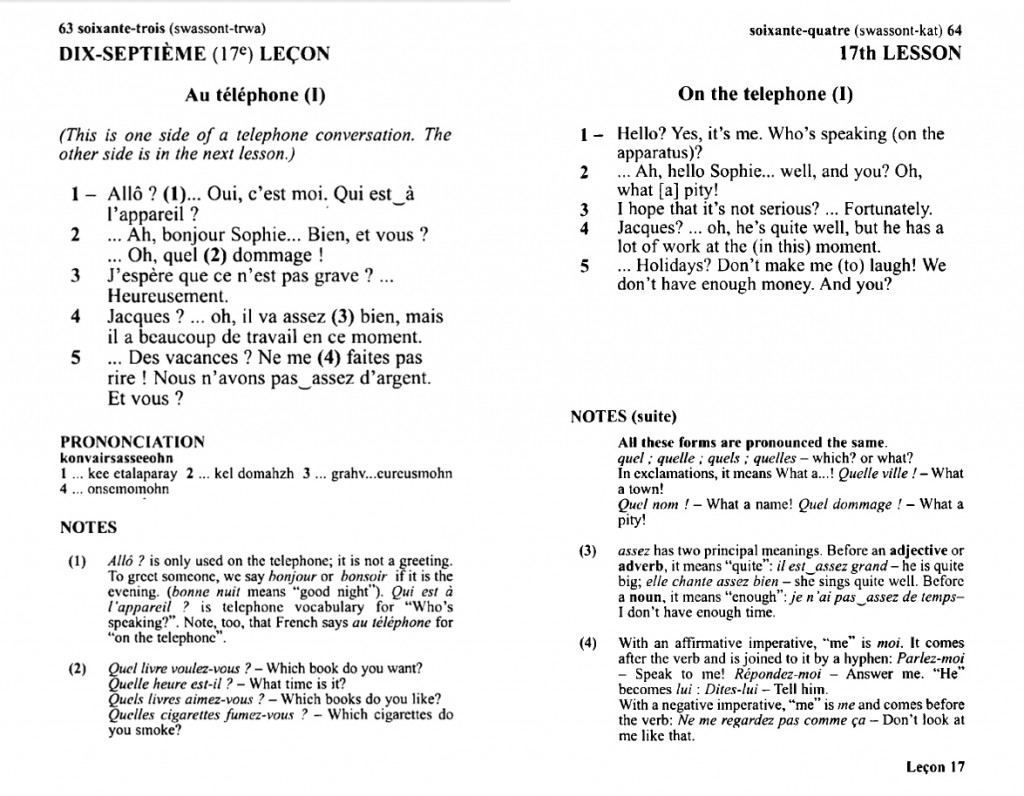 Any downsides? Well, in fact, I’ve found this method surprisingly good and I haven’t found any major downsides to it. Nevertheless, here are two minor things that I could point out:

1) The dialogues do not have names of people, they are only numbered. It can sometimes be confusing to follow the conversations as, often, 3 to 4 people are having a conversation, so at times you’re not sure who’s saying what. It really is not a big deal, honestly, but I thought I’d mention it anyway.

2) In the Chinese method, for some reason the author thought it would be a good idea to put an exclamation mark (or an interrogation mark) to almost every single sentence in the book (no joke, it’s quite amazing). Not a big deal but you’re sometimes wondering why the speakers seem that excited. I haven’t seen this in other Assimil books I’ve looked at, though. Luca Lampariello has said that he was rather disappointed with the Chinese method of the Assimil series, but I’ve found it to be thorough and worth going through nevertheless.

Average cost of the method: ~$20-50 (depending on the level for each series)

Available in: over 65 languages

Type of method: Each unit in Teach Yourself usually contains a dialogue with direct translations next or below the sentences, as well as exercises, translations, grammar points, etc., together with audio CDs.

The Teach Yourself Languages range is available in print, audio and CD packs, e-books, enhanced e-books (which utilize multimedia to enhance the learning experience), and will soon be launched as a series of apps for smart devices. Each new Teach Yourself product is graded according to a unique 5 level guide.

According to the Teach Yourself website, all of their language courses are suitable for beginners – they just get you to different levels of proficiency, at different paces of study. However, I have tried their Chinese method (Teach Yourself Chinese Complete Course, by Elizabeth Scurfield), and I’ve found it to be way too hard for a complete beginner in the language. Each unit introduces a whole new list of words and the pace is definitely too fast. In my opinion, this particular book is definitely suitable for a high-beginner (A2) or low-intermediate learner (B1).

In general, the Teach Yourself language series books are quite good, but many polyglots, as well as myself, prefer Assimil. Nonetheless, Moses McCormick, a polyglot who has studied over 50 languages, is well-known for using this method and he wholeheartedly recommends it.

So how exactly does the method work?

Well, it’s somewhat similar to Assimil. It’s basically a book that has dialogues included together with the audio, and you are directed through the various units and encouraged to go through exercises and so forth. However, the Teach Yourself method has, generally, many more explanations than Assimil, and therefore definitely more English. The method is also more varied than Assimil; as stated earlier, the Teach Yourself series has 5 levels, whereas the Assimil method has only 2. Here’s a preview of a page taken from the Teach Yourself Spanish method: 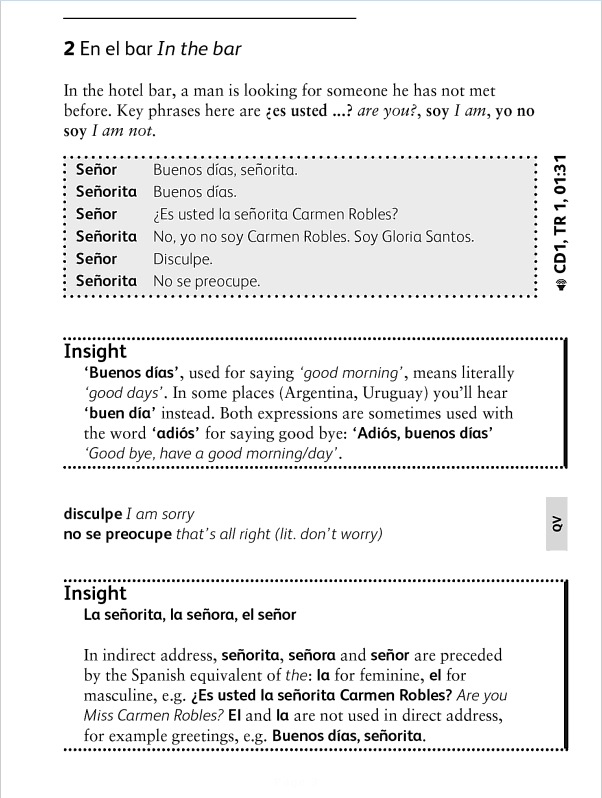 The good thing about Teach Yourself is that their method is available in many more languages than most other methods out there. It’s also rather easy to go through even for inexperienced language learners.

The biggest downside is that depending on the levels you choose,  the pace of some books might go too fast for a beginner (such as the Teach Yourself Chinese Complete Course). In the latter case, you should wait until you have a reached a high-beginner (A2) or low-intermediate (B1) level before actually tackling it.

In this specific Chinese method, another big problem is that they don’t introduce any characters until halfway through the book. So you don’t even have the option of getting somewhat familiarized with characters at first. However, fortunately in the other Teach Yourself series I have seen, the scripts are indeed included from the very beginning, so this particular Chinese method seems to be just one bad apple.

In brief, Teach Yourself is a solid language learning series, although you should make sure the pace of their books suits your needs. The great thing about this method is that it’s available in over 65 languages, which is quite amazing, and the books can be easily bought pretty much anywhere. However, explanations tend to be lengthier than Assimil, and as such the Teach Yourself series definitely contains more English than Assimil.

That’s it for part 1 of my review of some of the most popular self-study language methods out there. In part 2, we’ll have a look at three other popular methods: Pimsleur, Living Language, and Michel Thomas.