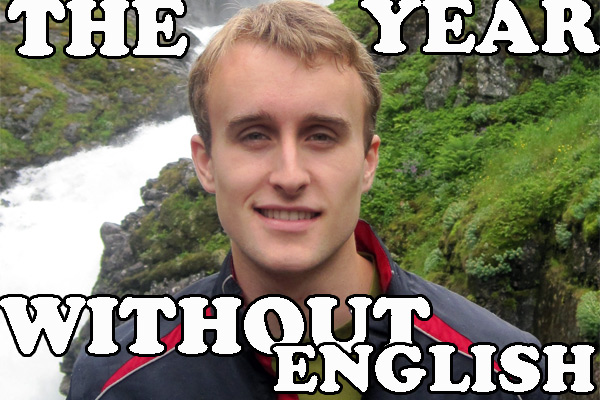 One year. Four languages. No English.

In September 2013, entrepreneur and popular blogger Scott Young, along with his friend Vat Jaiswal, boarded a plane heading to Valencia, Spain, knowing he wouldn’t speak a word of English for the entire year to come. Besides Spain, this one year adventure will bring him to Brazil, Taiwan and Korea, where he will push the boundaries and show the world what 3 months of total immersion in each country can do to improve fluency in a foreign language. The name of his project? The Year Without English.

As of late October 2013, Scott has been living in Spain for just under 2 months. The only exposure to the language he had had before boarding his plane for Valencia consisted of just 50 hours of study spread over a few weeks, mostly reviewing flashcard using Anki and listening to the Pimsleur method. Scott was kind enough to accept my request for an interview—in Spanish, of course, given that he can’t speak English (don’t worry, English subtitles are included).

Despite having just a few weeks of exposure to Spanish under his belt, Scott managed to respond, confidently and without hesitation, to all of the questions I asked him. In the interview, he explains in detail his reasons for starting The Year Without English; his choice of Spain, Brazil, Taiwan and Korea as destinations to learn the local languages; his strategy for ensuring he does not speak any English; and the biggest challenges and lessons he’s encountered so far with his project.

What do you think of Scott and Vat’s project? Do you think you could live for an entire year without speaking your native tongue? Do you think it’s a good idea to make your own challenge and push the boundaries like Scott is doing?

Reply below, and don’t hesitate to ask Scott questions (preferably in French or Spanish!) that haven’t been covered in the interview, I’m sure he’ll be more than happy to answer them.

1:18 – What’s the reason you started this project in the first place?

6:59 – Why did you and your friend Vat choose Spain, Brazil, Taiwan and Korea as destinations to go learn the local language?

9:58 – Have many people tried speaking to you in English in Spain?

13:08 – What have been the biggest challenges you’ve encountered so far with your project?

16:42 – Will you spend the exact same amount of time learning all four languages, despite differences in difficulty?

19:58 – Conclusion; Scott talks about what the ultimate purpose of his project is and what he wants to tell the world.

15 thoughts on “The Year Without English – Interview with Scott Young”